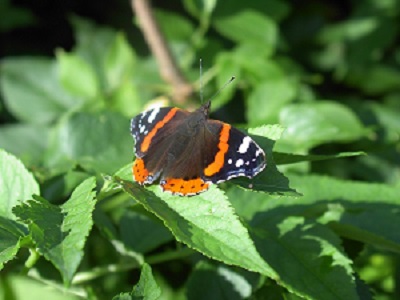 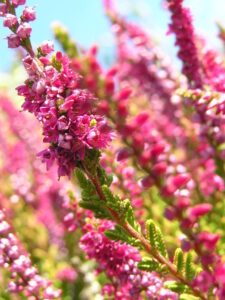 The most characteristic herb and grass species are heath bedstraw, wavy hair-grass, sheep’s fescue, common bent, pill sedge and tormentil. Dwarf shrubs, such as heather and bilberry, are also present.

The tussocky vegetation and bare ground that characterises lowland acid grassland allow a wide range of invertebrates to thrive including solitary wasps, butterflies and grasshoppers.

Bird species of conservation concern use acid grassland for breeding or wintering and include woodlark, stone-curlew, lapwing, chough, hen harrier and merlin. Adders and other reptiles bask on the bare ground, and small heath butterflies dance between flowers.

Like many of our other lowland habitats, lowland acid grassland is under threat from intensive agriculture including the use of fertilisers, herbicides and pesticides, liming, reseeding or ploughing for arable crops. Poor management including overgrazing and neglect can lead to rank vegetation and scrub encroachment, while activities like afforestation, mineral extraction, landfill and development cause massive losses. Recreation also has effects on this habitat, disturbing wildlife and causing compaction and erosion of the soil.

Staunton Meend has been designated a Key Wildlife Site by Gloucestershire Nature Trust.

As is the case elsewhere, commoner’s grazing rights are on the decline. A lack of grazing on the Meend means that the rare acid grassland and marsh habitat that the common supports is slowly being lost to bracken and scrub encroachment.

The Parish Council has a 10 year agreement with Natural England to reverse this trend. As part of the agreement scrub is being cut back, bracken is being rolled and grazing is being reintroduced. The common has been fenced and cattle grids installed across access tracks, so that our Exmoor ponies can graze the common in safety.

A team of supervised  volunteers regularly works on the common, undertaking essential activities needed to conserve its wildlife. Some of these activities include dry stone walling, fence and gate maintenance, scrub control and heather seeding.

You can help by taking part in these conservation activities.

Staunton Coleford Parish Council will also be setting up a Management Committee which will manage the day to day running of the Meend and report into the Parish Council.  If you would like to be involved please contact the clerk at parishclerk@stauntoncolefordpc.org.uk.  Please see the Terms of Reference

Staunton Meend is owned and managed by the Parish Council. It covers approximately 26 hectares of gently sloping land to the south of the village of Staunton and can be reached easily via a short walk from Staunton Village. The ‘right to roam’ on common land means you can use it for activities like: walking, sightseeing, bird watching, picnicking and running. Please note that car parking on the common is severely restricted. You are advised to leave your vehicle in village and access the common on foot by one of the many public rights of way. 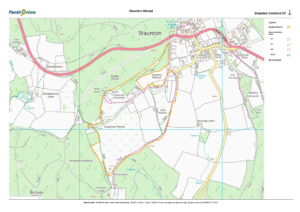 Please do: Keep dogs on a lead at all times, shut gates behind you. take your litter home.

Please don’t: Feed the ponies, light campfires, camp or park on the common.